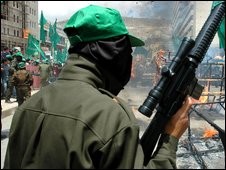 Two founder members of what was once the biggest Muslim charity in the US have each been jailed for 65 years.

Three other members of the Holy Land Foundation were jailed for between 15 and 20 years by a Dallas court.

The five men were convicted in November on charges ranging from money laundering to supporting terrorism.

Hamas was designated a terrorist organisation by the US government 14 years ago, making it illegal to give the group money or other support.

The defendants said they were only interested in helping the needy.

Their supporters said no money had been used to fund violence, and the case was a by-product of what it called the anti-Islamic sentiment following the 11 September attacks of 2001.

Shukri Abu Baker told the judge in Dallas on Wednesday: "I did it because I cared, not at the behest of Hamas."

But prosecutors argued that the humanitarian aid sent by the charity allowed Hamas to divert money to militant activities.

Jurors had reached their guilty verdict last year after eight days of deliberations following a retrial of the Texas-based Holy Land Foundation for Relief and Development.

It was the largest terrorism financing trial since the 9/11 attacks.

The indictment against the group said it sponsored Palestinian orphans and families in the West Bank and Gaza whose relatives had died or been imprisoned as a result of Hamas attacks on Israel.

The charity was shut down and had its assets frozen in 2001.